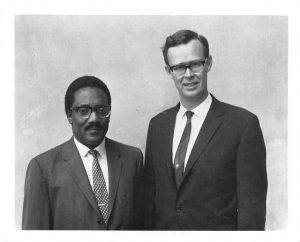 Visit Michael’s Legacy Website to find out more about his vast impact in Africa!

Michael Cassidy is a Christian leader, and the Founder of African Enterprise.  He is an evangelist, teacher, preacher, and author.  In 2012 he was made the Honorary Chairman of the Lausanne Movement for World Evangelisation, succeeding the late John Stott, and was also made the Distinguished Alumnus of the year at Fuller Theological Seminary in California. He holds an Honorary Doctorate from Azusa Pacific University.

“God has given Michael Cassidy the ability to make significant contributions to the Body of Christ and society as a whole… He has been inspirational in reversing the recession of evangelism in the Church in Africa as he has tirelessly helped others make evangelism essential to the ‘mission’ of the church.” – John Tooke

Michael was born in Johannesburg in 1936, and grew up in Lesotho with his parents and two sisters. He spent his school years at boarding school in South Africa, and went on to study Modern and Medieval Languages at Cambridge University.  As a student Michael’s friend, Robert Footner, led him in making a commitment on 23 October 1955 to follow Christ. Over the next two years Robert met with Michael every week to disciple and encourage him in his new-found faith.

In 1957 Michael felt the Lord calling him to city evangelism in Africa. After finishing his studies at Cambridge, Michael completed a Bachelor of Divinity in 1963 at Fuller Theological Seminary in Pasadena, California. It was in 1961, while still at Fuller, that Michael launched the African Enterprise (AE) ministry with the support of Charles Fuller, Founder of Fuller Seminary, plus a few other student friends. He returned to South Africa in 1964 with a small team to focus fulltime on carrying out AE’s calling to evangelism in the cities of Africa.

In 1969 Michael met Carol Bam during a mission to the University of Cape Town. They got engaged and married in December 1969 and have been happily married ever since. They have three children: Catherine, Deborah and Martin; and eight grandchildren.

Michael has remained strongly committed not only to evangelism and reaching the cities and leadership of Africa, but also to social justice and reconciliation. He was privileged to play a significant role in facilitating backstage negotiations which helped South Africa through to its first democratic elections in 1994 at a time when the nation was on the verge of civil war.

Michael Cassidy is one of Africa’s foremost evangelists and prophets…   – Moss Ntlha, General Secretary of The Evangelical Alliance of South Africa

Michael and African Enterprise have sought to be a unifying force among Christians by spearheading the largest Christian interdenominational leadership gatherings in Africa over the last fifty years. These gatherings included the South African Congress on Mission and Evangelism in Durban (1973); the Pan African Christian Leadership Assembly (PACLA) in Nairobi (1976 and 1994); the South African Christian Leadership Assembly (SACLA) in Pretoria (1979 and 2003); the National Initiative for Reconciliation (NIR) in Pietermaritzburg (1985); and the National Initiative for the Reformation of South Africa (NIRSA) in Pretoria (2008). Michael also led and chaired the Marriage Alliance of South Africa.

Michael’s vision and courage were key contributors to mobilizing the church in South Africa to challenge and topple one of the most evil and divisive systems in the world, namely Apartheid. – S. Doug Birdsall, Honorary co-Chair, Lausanne Committee for World Evangelisation

Michael is a Christian leader, an internationally respected evangelist, the author of many books, and the founder of African Enterprise. In 2012 he was made the Honorary Chairman of the Lausanne Movement for World Evangelisation, succeeding the late John Stott. He holds a doctorate from Azusa Pacific University. He was also made the Distinguished Alumnus of Fuller Seminary for 2012. He and his wife Carol have three married children and eight grandchildren, and live in Pietermaritzburg, South Africa.

“God has given Michael Cassidy the ability to make significant contributions to the Body of Christ and society as a whole.   With others Michael has gathered the Church together for times of reflection on its witness and mission.  He has been inspirational in reversing the recession of evangelism in the Church in Africa as he has tirelessly helped others make evangelism essential to the ‘mission’ of the church.  Through the African Enterprise teams, Michael’s unique approach of ‘Stratified Evangelism’ has become accepted practice  in urban evangelism as it can easily be adapted and applied in all strata of African society in ways that accommodate their nature and diversity. He has stood for biblical Truth, and has written widely on important issues touching the foundations of faith, Apologetics, social ethics and growing with God. Michael has also given national and international leadership in defining the biblical view of marriage and promoting it as a fundamental building block in society.”